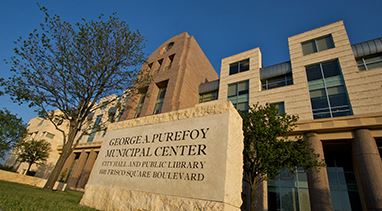 Frisco, Texas got its start from hardy pioneers who helped settle one of America’s newest states: Texas, admitted to the Union in 1845.

Most families who came to the north Texas prairie followed the Preston Trail (today’s Preston Road), a trail that began as an Indian footpath from the Red River south to Austin. Later, the route was known as the Shawnee Trail upon which millions of longhorn cattle were driven to markets in the north. The trail followed a high ridge of white rock that provided a dry path for the cattle. A Texas State Historic Marker about the Shawnee Trail is located at Collin College’s Frisco Campus.

With all of this activity, the community of Lebanon was founded along this trail and granted a U.S. post office in 1860. In 1902, a line of the St. Louis-San Francisco Railway was being built through the area, and periodic watering holes were needed along the rails for the steam engines. The current settlement of Lebanon was on the Preston Ridge and was thus too high in elevation, so the watering hole was placed about four miles to the west on lower ground.

A community grew around this train stop. Seeing the growth and opportunities, many residents of Lebanon decided to move and some even moved their houses to the new community on logs. The new town was originally named Emerson, but that name was rejected by the U.S. Postal Service as being too similar to another town in Texas. In 1904, the residents chose the name Frisco City in honor of the St. Louis–San Francisco Railway and later shortened it to its present name, Frisco.

Frisco remained an agricultural center for decades, boasting five cotton gins at one time. The population remained below 2,000 residents until a growth spurt in the 1980s foreshadowed what was to come. By 1990, Frisco’s location, its quality of life and visionary leadership contributed to it becoming the fastest growing city in the nation with a population of about 120,000 in 2011. Today Frisco’s population is over 150,000.

More helpful information about living in Frisco, TX can be found on their Resident Guide page, found here.

In 2017, U.S. News and Word Report named Frisco as the #5 top fastest growing city in America.